History is not one-sided....


How can you be sure of that? And how can you make decision that your research is the truth? Did you make a good research also from the other side, or was it enough what Armenian did say to you ? It was made in the war years all this propaganda, fake books and articles were published, an excuse for invasion, for war. After the war, Britains agreed that the blue book was a propaganda book...link

Malta court in 1921, when Ottoman empire was under invasion, all the archives of Ottoman was under their hand, and yet, Americans nor the Britain's couldn't find any documents about genocide of Armenians. Everthing was political.
The Malta court decided that the Turks were not guilty and the case was closed in 1921.
link:

The parliaments can not decided wat it is, Armenian should bring it, if there is a genocide, to the court of Turkey, if they can not get an answer, they can move to European court. But they don't do that, because archives are on our side..thus it is political.

Sukru Aya revealed all these frauds. Free E-Book : "Genocide Of Truth" by Sukru Server Aya,
Based On Neutral or Anti-Turkish Sources
link:

In 1985 , 69 American scholars, academics sent a statement to DC "there is no Armenian genocide"
some of them was threatened by Armenians, homes have been bombed.
link: Or, how many Armenians live in Turkey? Many, some legal some not, but they live. Well how many Turks live in Armenia, in Yerevan, which was once a Turkish city? ZERO.

"The Armenian rebels were particularly successful in the City of Van, the largest city of southeastern Anatolia. They seized Van from the Ottomans and held it until the Russians arrived. When the Armenians seized Van they killed every Muslim who could not escape. Those Muslims were mainly Kurds. The Kurds in the countryside retaliated by killing every Armenian they could find, just as Armenian bands killed all the Muslims they could. At the end of the war, retreating Armenians, who had finally lost to the Turks, killed all the Turks they could find on their line of retreat and filled the streets of the cities of northeastern Anatolia with corpses. In turn, the Turkish peasants who found Armenians killed them.

The Armenians of Anatolia, most of whom lived in war zones, lost 40% of their population. The Muslims in the war-torn provinces of the East lost almost exactly the same proportion of their population, 40%. Both Muslims and Armenians in the war zone died from war between the Ottomans and Russians, from starvation and disease, and by killing each other.

Armenian losses in World War I are often cited, but Muslim losses are seldom mentioned outside of Turkey. The horrible word genocide is often used against the Turks, even though no one has ever shown any real Ottoman order to deliberately eradicate Armenians. Claims against the Turks were believed in America because of prejudice against non-Christians, but mainly because the other side’s story was never told. Even today, few know of the equal suffering of the Muslims in that terrible war. When only the deaths on one side in a war are known a mutual slaughter appears to be a genocide. It is far better to study and pity the inhumanity of those times than to lay blame on one side or the other."

The following excerpt from "The Armenian File — The Myth of Innocence Exposed" by Kamuran Gürün
sheds convincing light on the number of Armenians killed during the time of the Armenian "Genocide."
link:

Archives of Turkey are open for every scholar who wants to work, but archives of Armenia or closed, even Boston archives. "Ottoman Archives are Fully open”
link:

read
"Death and Exile by Justin McCarthy",
and
watch his speech at the Federal Parliament in Canberra - Part1 :

Do you want to know what happened, or have you already decided to take part in running this political game? How would you feel about having to send your children to any school if lies are taught about your people's heritage?.....
Mr Tal Buenos, Israeli academic: link:

And: Khojaly.....a Azerbaijan city (if you don't know ,I will say: they are Turkish people)
Justice for Khojaly in 1992 - the Bloody slaughter of Khojaly Turks by Armenian troops :
link:

""British reporter Thomas De Waal interview with Sarkisian . Serge Sarkisian, long-time Defense Minister and Chairman of Security Council of Armenia who is the current president of Armenia: “Before Khojali, the Azerbaijanis thought that were joking with them, they thought that the Armenians were people who could not raise their hands against the civilian population. We were able to break that." . De Waal : "Serge Sarkisian does not deny !" ""
Echo of Khojaly-Foreign Mass Media Briefly about Khojaly
link:

Besides Armenia is not their real name it is Hay-Hayk.
How Hays became Armenians? Historical background.
link:

Who is in hostile and aggressive behavoir?
"Armenian burnded Turkish Flag" watch

We are not amplified by hate, we bury our pain inside. Yes, from both sides people died, but that was not a genocide of Armenians, instead it was Turkish genocide. Many mass graves are found that belongs to the Turks, and there is no mass grave that belongs to the Armenians. Turks Offer Help to Excavate Alleged Mass Armenian Grave: link

Professor Justin McCarthy,Historian at the University of Louisville,
and Mr. Bruce Fein, US lawyer specializing in constitutional and international law, who served as an advisor to the former US President Ronald Reagan; CTC Press Conference
Canadian Parliament 26-Feb-15 full video: 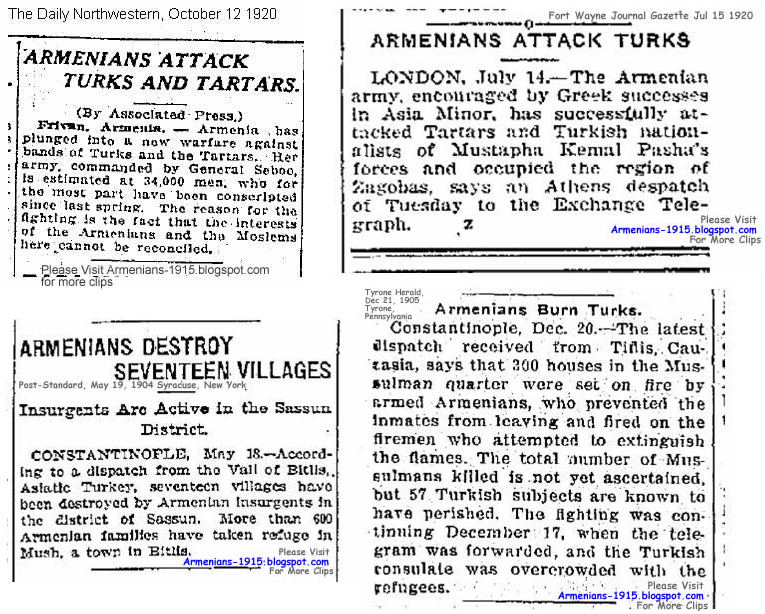 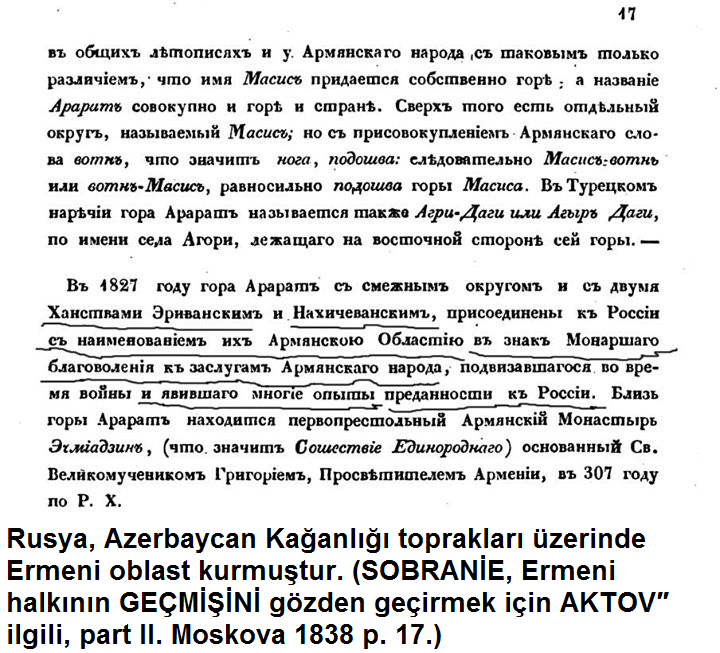 "The current Republic of Armenia was formed only at the beginning of the last century, and more specifically - in 1918. May 26, 1918, when the Transcaucasian Sejm decided to disband. On the same day was proclaimed the independence of Georgia and Azerbaijan on May 28 announced the fraction of Azerbaijan's independence. The Armenian fraction of the Diet was no territory and population. Even in any county in any police station in Georgia and Azerbaijan, Armenians did not constitute a majority of the population.

But at that time, the Armenian government faction begged Fatalihana Khoysky give them a piece of land for self-determination of the Armenian people and the establishment of the state, the Armenian terrorist gang led by Andranik, Dro, and other Amazapsom brutally destroyed the Muslim population throughout Azerbaijan, particularly in the Erivan Province . And the Armenian propaganda in the capitals of Europe and the United States drew the image of "long-suffering people" and thus skillfully played on the religious feelings. She presented the Armenians all higher state and spiritual reasons in Europe and the United States as a nation, "the first to adopt Christianity." From court to court, from the office to the office they solicited funds for the Armenian bands and begged for help in the creation of the Armenian state.

The victorious countries in World War I, through their representatives informed the government F. Khoyski that providing Armenians Erivan and some adjacent areas could serve as a recognition of the independence of Azerbaijan Democratic Republic. These conditions of the Entente Prime Minister Khoyski tabled in the National Council of ADRs May 29, 1918. Several deputies led by Vice Speaker Gasanbekov Agaevym categorically opposed these conditions. But in the end serious conditions Entente aimed at the dismemberment of the territory of Azerbaijan were adopted (TSGAOR Azerb. Republic. F.907, OP.1, hr.1, l.5).

An answer to a journalist about violates ceasefire, from President Aliyev: "They invade our territory, violating international law, they committed genocide in Khojaly. They ruined our historical and religious monuments and they blame us! The question must ask as:- What are Armenian troops doing here? What are they doing in occupied lands of Azerbaijan? If he does not want to die, then let him go to Yerevan. What are they doing in Agdam or Fuzuli? There is many room in their country, because many Armenians left Armenia." . Agdam and Fuzuli belongs to Azerbaijan, and these territories are under occupation by Armenia. ...link to read


Yes Yerevan is older but, history of Armenia (Haykistan) begins at the 6th c BC in that region. Subar Turks, Scythian/Saka Turks, Parthian Turks, As Turks was already there. Must read more to understand.

Turkish history is much older than you think! If Turkish language have influence on Akkadian language...

Akkadian, although a dead language, has left deep imprints on Semitic and some Indo-European languages, and has played an important role in the history of mankind. It is accepted as the ancestor of all the Semitic languages. Beginning from the era of Sargon I, it became the official language in a vast area from Anatolia to Egypt and to India. Akkadian was the "Lingua Franca" of the ancient world, and has passed on many words to other languages such as Persina, Sanskrit and Greek. Although, Assyriologists at present ignore it,the lnaguage spoken in the very days of Akkad, in BCE 28-24, may have been an agglutinative language like today's Turkish or Magyar, rather than an inflective language like today's Arabic and all Syriac languages.Thus it may show parallelism with Turkish.

Similarity Between Turkish & Akkadian Based on Rules of Inflective Agglutinative Languages ; AL&LS Advances in Language and Literary Studies... link for the international journal 2014 :

"As previously reported, in Moscow completed its international scientific conference "ethnogenesis, history, language and culture of Karachai-Balkar people", held in Moscow Institute of Ethnology and Anthropology. NNMiklukho Maclay of the Russian Academy of Sciences.

The conference was attended by about 400 people from 16 countries, including scientists from Azerbaijan. The conference discussed the most important issues of Turkish history, special attention is paid to the history of the Turkic peoples of the Caucasus.

On the final day of the conference voted unanimously for a resolution presented by the Azerbaijani scientists, leading researcher at the Institute of Archaeology and Ethnography of the Academy of Sciences of Azerbaijan, PhD on the history of Zaur Hasanov. As noted in an interview Z.Gasanov APA, resolution refuted scientifically erroneous opinion that all the Scythians spoke only one Iranian language. The scientist said: "From the point of view of the participants as part of the Scythian Empire were tribes speaking different languages, including Turkish. The decision of the conference is a collective scientific support for the view that the rights of the vast Scythian Empire "Royal Scythians" were a Turkic ethnic group. They created their own state in the Caucasus 2700 years ago. Thus, Ancient history begins with the Scythians and other related peoples, such as the Cimmerians, Sakas, Sarmatians, Alans. "  ....  news in Russian language
.

The Legacy of Scythians by Valentyn Stetsiuk,Ukraine
All these linguistic findings combined with archaeological artifacts allow to confirm that Scythian had Turkic origin and modern Chuvashs are Scytians descendants....link

"The history of a people need to be read, a bit of by looking at the writings of his enemies."
L.N.Gumilev

The truth, it can be hurtful….
SB