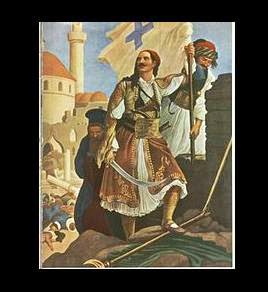 British historian W. Alison Phillips ,
who wrote the History of the Greek Revolution,
noted in 1897:


Everywhere, as though at a preconcerted signal, the peasantry rose, and massacred all the Turks—men, women and children—on whom they could lay hands. In the Morea shall no Turk be left. Nor in the whole wide world. Thus rang the song which, from mouth to mouth, announced the beginning of a war of extermination... Within three weeks of the outbreak of the revolt, not a Muslim was left, save those who had succeeded in escaping into the towns.

According to another historian of the Greek revolt, William St. Clair, upwards of twenty thousand Turkish men, women and children were killed by their Greek neighbors in a few weeks of slaughter.William St. Clair also argued that: "with the beginning of the revolt, the bishops and priests exhorted their parishioners to exterminate infidel Muslims." St. Clair wrote:

The Turks of Greece left few traces. They disappeared suddenly and finally in the spring of 1821 unmourned and unnoticed by the rest of the world....It was hard to believe then that Greece once contained a large population of Turkish descent, living in small communities all over the country, prosperous farmers, merchants, and officials, whose families had known no other home for hundreds of years...They were killed deliberately, without qualm or scruple, and there was no regrets either then or later.

Atrocities toward the Turkish civilian population inhabiting the Peloponnese had started in Achaia on the 28th of March, just with the beginning of the Greek revolt. On the 2nd of April, the outbreak became general over the whole of Peloponnese and on that day many Turks were murdered in different places. On the third of April 1821, the Turks of Kalavryta surrendered upon promises of security which were afterwards violated. Followingly, massacres ensued against the Turkish civilians in the towns of Peloponnese that the Greek revolutionaries had captured.

The Turks in Monemvasia, weakened by the famine opened the gates of the city, and laid down their weapons. Six hundred of them had already gone on board the brigs, when the Mainotes burst into the town and started murdering all those who had not yet reached to the shore or those who had chosen to stay in the town. Those on the ships meanwhile were stripped of their clothes, beaten and left on a desolate rock in the Aegean, instead of being deported to Asia Minor as promised. Only a few of them were saved by a French merchant, called M. Bonfort.

A general massacre ensued the fall of Navarino on August 19, 1821.

The worst Greek atrocity in terms of the numbers of victims involved was the massacre following the Fall of Tripolitsa in 1822. Up to 30,000 Turks had been killed in Tripolitsa:

For three days the miserable inhabitants were given over to lust and cruelty of a mob of savages. Neither sex nor age was spared. Women and children were tortured before being put to death. So great was the slaughter that Kolokotronis himself says that, from the gate to the citadel his horse’s hoofs never touched the ground. His path of triumph was carpeted with corpses. At the end of two days, the wretched remnant of the Mussulmans were deliberately collected, to the number of some two thousand souls, of every age and sex, but principally women and children, were led out to a ravine in the neighboring mountains and there butchered like cattle.

Although the total estimates of the casualties vary, the Turkish, Muslim Albanian and Jewish population of the Peloponnese had ceased to exist as a settled community. Some estimates of the Turkish and Muslim Albanian civilian deaths by the rebels range from 15,000 out of 40,000 Muslim residents to 30,000 only in Tripolitsa. According to historians W.Alison Phillips, George Finlay, William St. Clair and Barbara Jelavich, massacres of Turkish civilians started simultaneously with the outbreak of the revolt, while Harris J. Booras wrote that the massacres followed the brutal hanging of Ecumenical Patriarch Gregory V of Constantinople.

Historian George Finlay claimed that the extermination of the Muslims in the rural districts was the result of a premeditated design and it proceeded more from the suggestions of men of letters, than form the revengeful feelings of the people.

In Athens, 1,190 Turks, of whom only 190 were capable of bearing arms, surrendered upon promises of security. W. Alison Phillips noted that: A scene of horror followed which has only too many parallels during the course of this horrible war.

Vrachroi, modern day Agrinio, was an important town in West-Central Greece. It contained, besides the Christian population, some five hundred Mussulman families and about two hundred Jews. The massacres in Vrachori commenced with the Jews and soon Mussulmans shared the same fate.

There were also massacres towards the Muslim inhabitants of the islands in the Aegean Sea, in the early years of the Greek revolt. According to historian William St. clair, one of the aims of the Greek revolutionaries was to embroil as many Greek communities as possible in their struggle. Their technique was "to engineer some atrocity against the local Turkish population",so that these different Greek communities would have to ally themselves with the revolutionaries fearing a retaliation from the Ottomans. In such a case, in March 1821, Greeks from the Samos island had landed in the Island Chios and attacked the Muslim population living in that island.

Another similar massacre took place in the island Hydra, one of the most important Aegean islands. Besides the atrocities committed against the local Muslims in the island, two hybrid brigs captured a Turkish ship laden with a valuable cargo, and carrying a number of passengers. Among these was a recently deposed Sheik-ul-Islam, or patriarch of the Orthodox Muslims, who was said to be going to Mecca for pilgrimage. It was his efforts to prevent the cruel reprisals which, at Constantinople, followed the news of the massacres in Peloponnese, which brought him into disfavor, and caused his exile.There were also several other Turkish families on board.

British historian of the Greek revolt, W. Alison Phillips noted: The Hydriots murdered them all in cold blood, helpless old men, ladies of rank, beautiful slaves, and little children were butchered like cattle. The venerable old man, whose crime had been an excess of zeal on behalf of the Greeks, was forced to see his family outraged and murdered before his eyes...


History of the Greek Revolution, Volume 1
By George Finlay

The night before Hypsilantes quitted the Russian territory Karavia assembled the Hetairists and his band of mercenaries (called Arnaouts in the principalities, though compose of Greeks, Servians and Bulgarians as well as albanians) and after informing them that a revolution was about to take place under Russian auspices, he led them to attack the Turkish officer and his men.

The native population of Galatz took no part in this infamous transaction ; they neither stained their hands with blood, nor disgraced themselves by robbing their guests.

Indeed, the cruelty of Karavia and the licentiousness of his Arnaouts, terrified the Moldavians, who saw little prospect of enjoying either order or security under the goverment of the Hetairists.

The sanguinary and revengeful passions awakened by the assassination of the Mussulmans at Galatz spread rapidly over the whole province, in consequence of the misconduct of Hypsilantes and the timidity of Michael Soutsoz. About fifty Othoman soldiers were stationed at Yassi as a guard of honour.


That Greece Might Still Be Free:
The Philhellenes in the War of Independence by William St Clair

More disturbing facts soon came to their attention. An unpleasant smell hung around the towns which they soon discovered arose from the headless corpses lying outside the walls. Emaciated and frightened young women and boys were to be seen running around, half naked among the ruins.

Wild dogs and scavenging birds were everywhere. The Greeks at Navarino, eager at first to impress, told boastfully of the great massacre of a fex months before. One Greek claimed to have personally killed eighteen Turks, another said he had stabbed nine men, women and children in their beds.

The volunteers were proudly shown the boddies of Turkish women who had been thrown from the walls a few days previously after being raped and then having their arms and legs cut off.


Far from being impressed, as the Greeks intended they should be, the volunteers were shocked and distressed at these sights; they were equally horrified at the open PROSTiTUTiON   of the surviving TURKiSH BOYS  and the  UNASHAMED  offers of the GREEKS to share their  PLEASURES  - another aspect in which the military customs differed from those of the WEST.

page 86
As for the Europeans it merely served to confirm their opinion that the Greeks were not only barbarians but cowards as well....

2- William St Clair - That Greece Might Still Be Free: The Philhellenes in the War of Independence :
(online/ book)