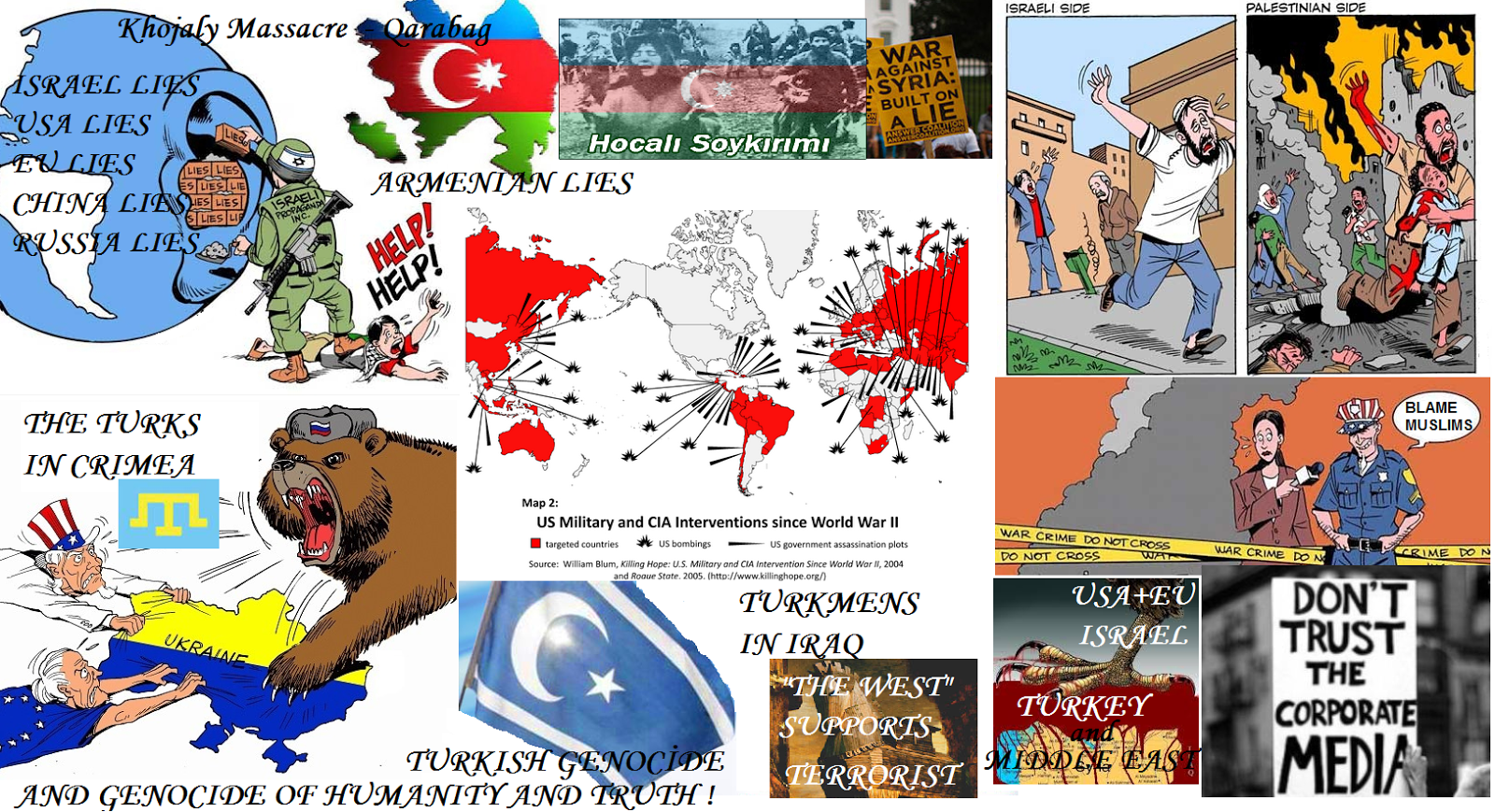 US and Israel hegemony in the Middle East

ON THE OTHER HAND THEY "SECRETLY"
SUPPORT TERRORISM !

AND WHEN THE PEOPLES OF THESE LANDS
"ONLY DEFENTING  ITSELF"
IS TERRORISM..

Time to End Western Support for Terrorists and
War In "Old World".
You Can Be Patriotic, So We Can...
But Patriotism Is Valid Only At Home,
And Not Outside !!!! 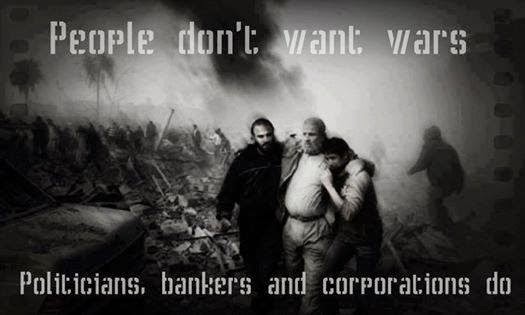 There is no Kurdish problem, but rather a problem of terrorism, supported by "IMPERIALIST COUNTRIES, POLITICIANS  AND MAFIA CORPORATIONS"


“Turkey does not have a Kurdish problem. There is a socio-economic underdevelopment in the region. By abusing this, several external actors such as neighbouring and some European countries have promoted Kurdish terrorism/separatism in the region to destabilize and divide the Turkish Republic”. (Bülent Ecevit, former prime minister of Turkish Republic)


Turkey tried to implement several economy policies in order to develop the economic conditions of the Southeastern Turkey. For example, the South-eastern Anatolian Project (GAP-Güneydogu Anadolu Projesi) which aimed to accelerate the living standards in South-eastern and connect the local community to the rest of the country.  However, neither this project is completed, nor the the southeastern part is developed, because of the terrorisme!

* İsmet İnönü ; Commander of the Turkish War of Independence, sent to the negotiations of the Lausanne Peace Treaty in 1922, became Prime Minister in 1923 and elected President after the death of Atatürk in 1938; was a Kurdish of origin !


The Kurds have freedom in Turkey in every field, every office, in every region to live and work as other citizens. They are not accepted as a minority in Turkey. In fact, there is no minority in Turkey, with the Lausanne Peace Treaty it was separated as  "muslims" and "not muslims", and not with the ethnic or islam (alevieten,shia or sunni) ! On the otherside "the west Turks" can not make business in the eastern of Turkey so easily as they do....

Kurdish language is under the Persian influence, is a mixture of many language and dialectic. Kurdish language was used till the 80's, after a military strokes with the help of the Americans! , was prohibited....


Churchill had once said; " When I give an alphabet for the Kurdish people ,then you will see..."


The Kurdish alphabet is not a standard, they use Latin, Cyrillic and Arabic alphabet . Whereas there is a Turkish alphabet.
The Kurdish language is madeup, they have c.8000 words, which 3500 Turkish, 550 old Turkish (Kökturks), and the rest arabic, farsi, armenian is.

They are not an other nation!  the Kurds are Turkish tribe ...
link


Zaza's, who is said to be Kurds is 80 percent of Turkish origin , they come from Oguz/Oghuz/Guz  a Turkish tribe, like the Huns, Kıpchaks, Cumans, Avars, Tatars, Kazakhs, Kırghız,etc.


But today:
"Europeans have their own research; 10 to12 percent of the Kurds are Turkish origin. Today, 40 percent of Kurds in Turkey is of Jewish (Arami) descent.    25 percent of Farsi origin, 15 percent Armenian origin and 10 percent Kurdicized Turks !!!!"

This is the study of Americans and Europeans....
Dr.Osman Çataloluk (molecular geneticist) :

TO GET PERMISSION TO LIVE THERE, before they get the citizenship !!!


At the beginning of the 20th century, Kurdish identity and to built a Kurdish state was not brought by the Kurds,
it was brought by the Britain's, now the USA.


The Imperialist countries says:
"You can not say The Turkish state, you must indispensable it. If there is a Turkish state , there can be a  "Kurdish state" ."


Ups, Sorry, there can be a American State , which is full of "Strange Etnics", but  "Turkey can not, which everybody is TURKISH / TURKIC TRIBE AND NOT STRANGE ETNICS"


*The map that shows where America came from: A truly captivating map that shows the ancestry of everyone of the 317 million people who call the melting pot of America home can now be seen on a U.S. Census Bureau map. link 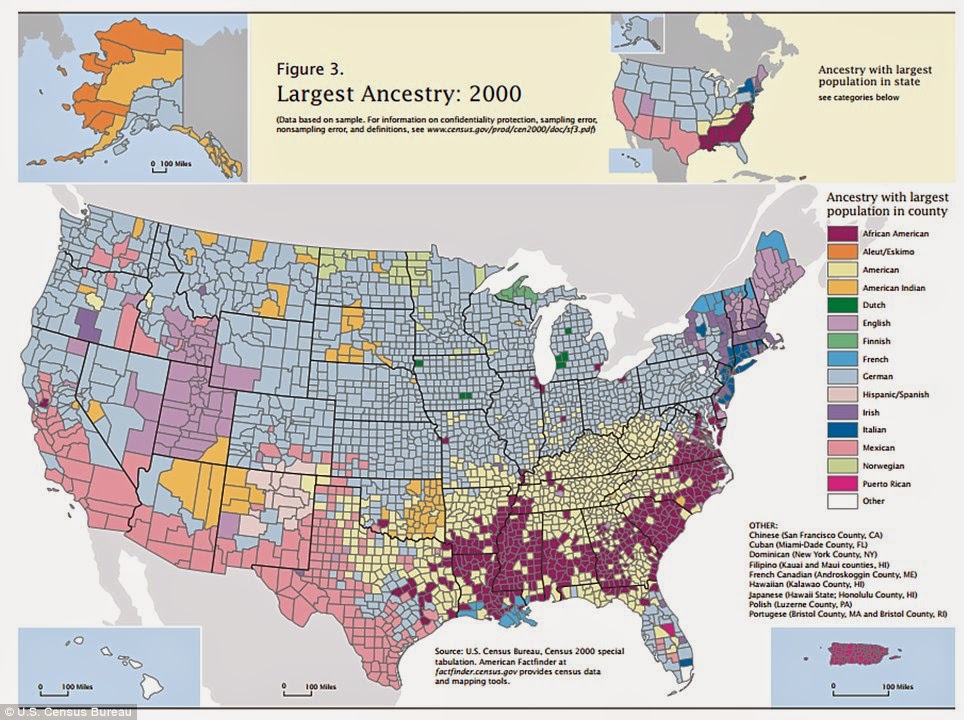 So what is Kurdistan then?
The Assyrian tablets and the Seljuks Turks did also used the word Kurdistan, but it was not an ethnic name, it was a geographical name, such as Anatolia/Asia Minor or Armenia!


(Armenia was not the name of the nation, because they called themselves Hayks in the history ! - Prof.Dr.Firudin Ağasıoğlu Celilov - link)

Since the PKK was founded on 27 November 1978, it has been involved in armed clashes with Turkish security forces.
The full-scale insurgency, however, did not begin until 15 August 1984.

( and the end of ASALA  (Armenian Terrorists) ,which is also brought by the imperialist countries : link )


The Republic of Mahabad, officially known as the Republic of Kurdistan and established in İran, was a short-lived self-governing state.

Why didn't they lived there? They didn't because Turkey was not included, it is just a game being played against Turkey by "Big Brothers".


The problem is:
To destroy the history, civilization, language and religion
of the Turks and Muslims!
Imperialisme is feeding the Attackers and Religious Fanatics !
Because of the Terrorism and War ,
unable to grow and stay uncivilized.
There is no Kurdish problem in Turkey,

The Turks are the problem to the World!


Today, the ties between Turks and Summerians,
Etuscans, Scythians become known in the light
of scientific datas day by day.
So the History begins with the Turks .....
If you Erase the Turkish History, you have Nothing....! 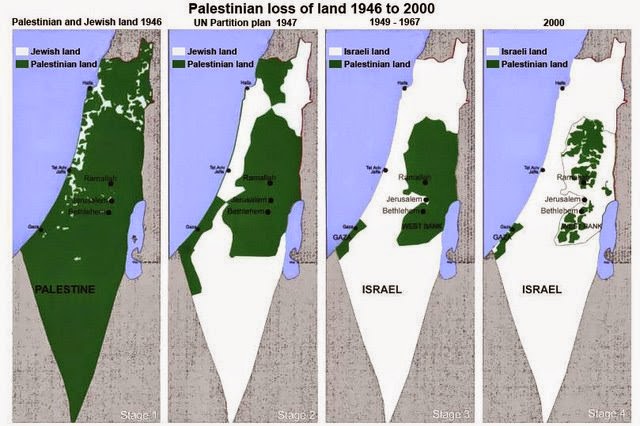 
* Sebian Army left a trail of blood. This is an article published in the New York Times on December 31, 1912. It is on massacres of Albanians in the Balkan Wars.  : pdf 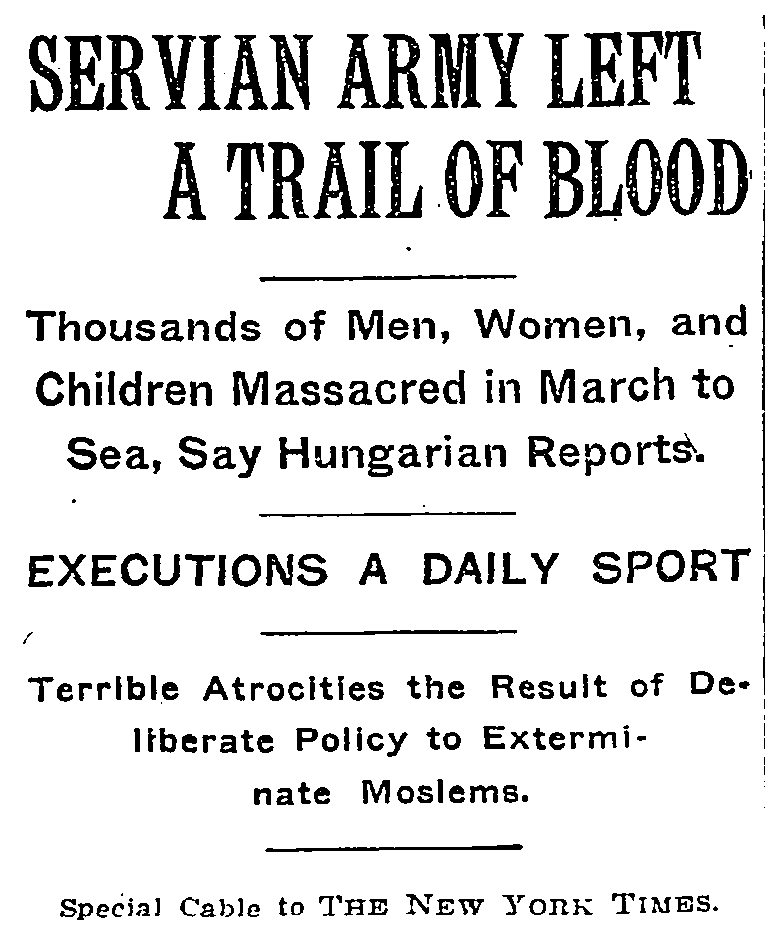 *One might also mention the crime of genocide committed by Greek troops against the civilian Turkish population by Dr. George Nakratzas - link 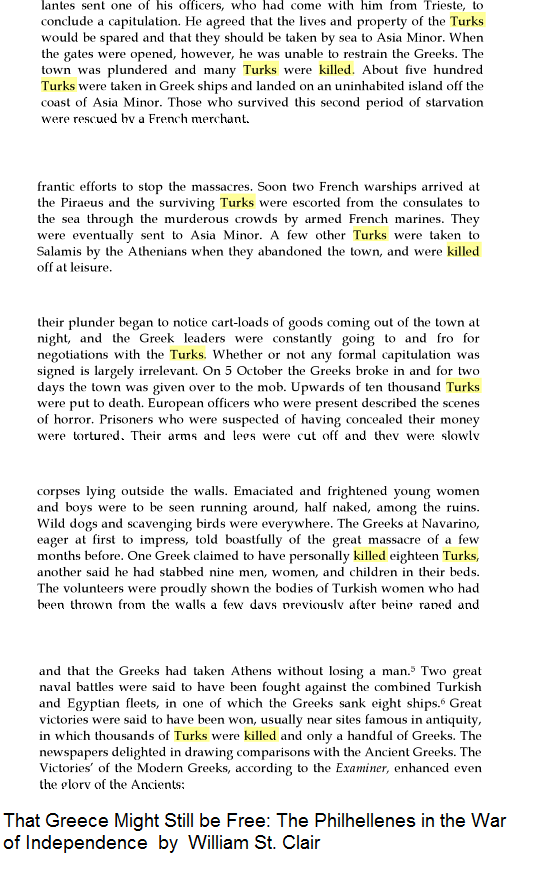 * British historian W. Alison Phillips, who wrote the history of the Greek revolution, noted in 1897: "Everywhere, as though at a preconcerted signal, the peasantry rose, and massacred all the Turks—men, women and children—on whom they could lay hands. In the Morea shall no Turk be left. Nor in the whole wide world. Thus rang the song which, from mouth to mouth, announced the beginning of a war of extermination... Within three weeks of the outbreak of the revolt, not a Muslim was left, save those who had succeeded in escaping into the towns...."


* The other side of the Falsified Genocide: link

* Genocide of the Truth by Şükrü Server Aya  : link

*  Confessions of an Economic Hit Man -by John Perkins (book) 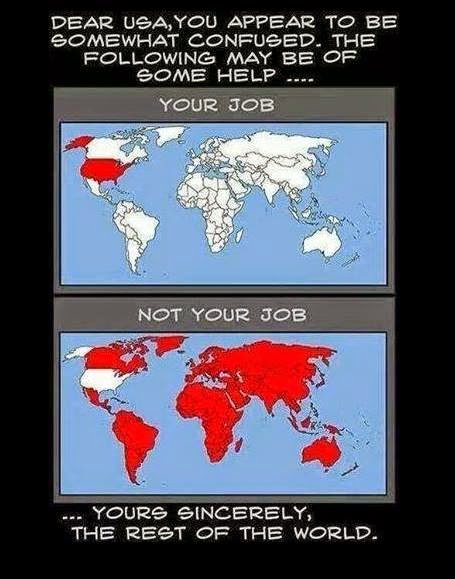 Arrest Obama Under NDAA For Supporting Terrorists in Syria. The evidence that FSA militants in Syria are being led by Al-Qaeda terrorists and are carrying out terrorist atrocities is overwhelming.

Under the terms of the National Defense Authorization Act that he personally signed into law, President Barack Obama should immediately be arrested and indefinitely detained for providing support to Al-Qaeda terrorists in Syria.


I am the Turk in Belene, the one who was sent to this island of death, where Muslims were fed by pork, in order to change our language and religion... I am thousands of Turks who were destroyed under Bulgarian tyranny...


I am the Turk in Mora. I am 20 thousands of Turks who were burnt alive and cut like animals by my Greek neighbours, whom I shared my bread and water....


I am the Turk in Yugoslavia, Bulgaria, Greece and the Balkans. I am the rest lived under tyranny of Greeks, Bulgarians Serbians to change my beliefs...


I am the Turk in Cyprus where I’ve been killed for 150 years under leadership of  Orthodox Church/Christian priests and laid without name and grave... (You use always "Muslims Terrorist, why can I not use Christian Terrorists? Think!)


I am the Azerbaijan Turk in Hocalı. I am 5000 innocent Turks who were massacred in one night regardless of children, women, elder ... by Armenians...


I am the Azerbaijan Turk in Karabag. I am the one who were buried alive and rest destined to live to live in inhuman way...


I am the Turk that was backstabbed by Arabians fed by British, in Yemen, Trablusgarp, Mekke, Medine, in thirst for a drop of water and oil...


I am Kırım Turk. I was buried alive under ice of Siberia where I’ve been taken in the night of May 18th, 1944. The blood of resisters turned the moon into scarlet. The one who stayed sent their deaths in ships to Black Sea. I am the Kırım Turk whose screams still can be hurt in Black Sea...


I am the Iraq Turk. I am where US troops brought death instead democracy. I am dying in thousands in front of the eyes of those peacebringers !  I am killed while leaving by wiped off records. I am the Iraq Turk where humanity is killed everyday...


I am the Anatolia, I am the Turkish homeland. Greeks, the puppets of British, Armenians, the puppets of French has entered these lands with salivation. So many heroes, so many youngsters, so many mothers, so many daughters, so many grandmothers and grandfathers are buried into my soil, so many babies, born and unborn, felt to my land with bullets on their bodies. Some were burnt alive in mosques... Raped girls have jumped into wells, heads cut alive seeked their bodies...

GENTLEMEN, WHO WAS MASSACRED THEN?

The responsibles of those crimes are trying to touch noble Turkish Nation with their dirty hands by making Armenian, Greek and Kurdish statues by the help of defects in ruling bodies of Republic of Turkiye.


But it should be known that this situation is temporary.
Turkish Republic whose borders wer drawn with blood and Turkish Nation will stand still as long as the world turns.


WE ARE NOT THE ENEMY....
WE DON'T HAVE ANY BASES OUTSIDE TURKEY
US ARMY BASES ARE OUTSIDE THE USA,
SUCH AS  725 MILITARY INSTALLATIONS
WHO IS THE THREAT ?

I do not blame all the people living in those countries.
With my Regards....
SB.

HAPPY IS HE WHO SAYS
"I AM A TURK"

WE ARE NOT THE ENEMY OF ANYONE,
ONLY THOSE WHO ARE THE ENEMY  OF HUMANITY,
IS OUR ENEMY.