Mass Graves of an Alleged Genocide


Armenians allege a genocide dated back to 1915, where a mere one and a half million Armenian were exterminated by the Ottoman Empire, during relocation which took part on mid May to early November in the year 1915.


The alleged extermination period is only 155 days and the total amount of the victims alleged to be one and a half million.


This means every single day 10 thousand Armenians were shot to death, killed, hanged or exterminated or etc.


Accordingly a total of 6 thousand and 666 cubic meters needed to be dug every single day from May 1915 to November 1915.


No excavators, dozers, loaders, JCB’s, lorries, tucks or trench diggers were available at the beginning of the Twentieth century, not even a single car was available in the Eastern Anatolia region during those years.


A healthy and young man can excavate only around half cubic meter of a pit using digging tools like a pickax and shovel in one hour working nonstop with a normal effort and a pace. If it is in the size of a football field, starting to dig from the center and dispose the excavated soil to any place outside of the football field, the time needed to excavate half a cubic meter increases to 60 minutes in average.


This means every day a 6 thousand and 666 hours needed to excavate a mass grave and to dispose the soil than a further approximately 3 thousand hours to cover the laid corpses, totaling almost 10 thousand hours of work every day for a period of 5 months, non stop.


Assuming a 6 hours productive work by a healthy man, 1 thousand and 7 hundred man needed every day to dig the pit, lay the corpses and cover them, subject if they can non stop work for 155 days. Normally a job rotation would be needed to proceed in the same pace every day which would increase the amount of people employed to around 2 thousand and 5 hundred.


Of course some guards from the Ottoman army  would also be needed to keep the order and prohibit escapes. This means food for 10 thousand captives and  3 thousand employees, or soldiers every single day, if not the total of the captured Armenians were more than 10 thousand.


I never found a record in the ottoman archives delivery of food, water, tents and other necessary goods to a group people employed to dig mass graves in Eastern Anatolia for 155 days.


After the alleged extermination there should be 150 mass graves in the different locations of Eastern Anatolia in the size of a football field.


Where are those exterminated Armeian bodies?.

In Bosnia 8 thousand Bosnians were shot to death and their grave yards shifted for 3 times consecutively in order to wipe out the traces but still traced and found.


Why no body couldn’t locate any one of these 150 mass graves?


I also could not find any record of confession of those 3 thousand employees or their backbiting or remorse of any kind. At least one of them should stand up later on say that “We killed Armenians and buried them to this very spot” pointing the mass grave. But these never happened.


Where are the mass graves of the 1.5 million murdered Armenians???

Prof.Dr.Ata ATUN
(his own web) 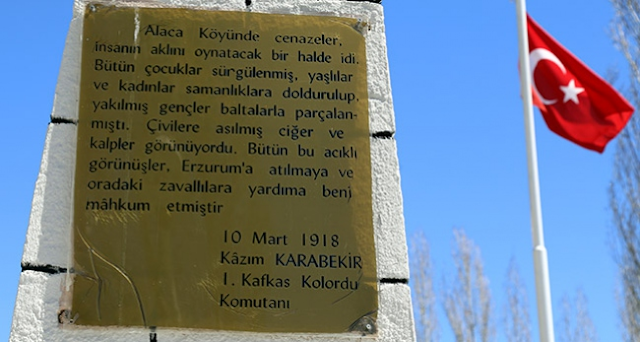 "The Ottomans did, in fact, later remove some one million Armenians from behind their military line, and of course, the guerrilla attacks stopped. The proof is that there were more than one million Armenian refugees yet Armenians today murmur and whimper that the horrible Muslim Turks massacred 1.5 million of their Christian forefathers in 1915. This is as massive of a tall tale as that told by the Armenian high priest’s claim of massacre.

The basic question is how could the Turks have murdered a half million more Armenians than who actually lived in eastern Turkey at the time? How can a million Armenians have been refugees and also been murdered at the same time? The Armenian tall tale of 1.5 million of their people being massacred is absurd and the historical evidence proves that the Armenians are not truth tellers! Historical evidence proves that it was the Armenian Christians who massacred far more Muslims in their selfish greed of wanting something for nothing than there were Armenians killed. Perhaps the Armenians have invented their very own system of “new math” that only they use and understand to fleece and deceive the Christian world!

What would have been the United States government’s response had it been subjected to such treason? Based upon the U.S. Army actions in the Civil War, the Indian Wars, and the War of the Philippines — the US government would have acted much like the Ottoman government. The Armenian guerrillas, who didn’t fight in Russian uniforms, as well as the Armenian citizens who supported and helped them, would have been treated as “highway robbers or pirates” just as Native Americans and Filipinos were treated. This is how the American army treated Native Americans and Filipinos — not to mention its treatment of Japanese Americans starting in 1942 during the 5 years of World War II.

Clearly today, neither a single United States state nor the United States Congress has any business or any right to pass meaningless resolutions attacking American’s friend and partner, Turkey. To back and support the bogus Armenian “genocide industry” is to approve of Armenian treason in 1915 as well as approving its acts of terrorism today on its neighbor Azerbaijan.

Consider this fact situation: Mexico attacks the United States and makes steady progress toward Washington, D.C. Native Americans support Mexico and wage hit and run attacks behind the American troops and disrupt United States military supply lines. Does any American really think that the US government would stand back and permit Native Americans to run wild and create problems for the army? Certainly not! Would any American stand back and permit some European country to claim we had committed a genocide when we removed Native Americans from behind our army when they were doing major harm to our soldiers’ defense of the United States of America. Certainly not!

Neither the United States government nor any individual state within the United States has any business sticking its nose into a sovereign nation’s effort to defend its lands. How can any U.S. state or the national government make a judgment call about a disputed action that took place more than 6,000 miles away more than 85 years ago? There is no real American interest to back and support Armenian treason and terrorism. To take sides unfairly, as some 26 U.S. states have done, is to give the Muslim world a good reason to hate Americans.

The sad fact of the matter is the politicians of the United States are taking the word of a gang of Armenian thugs just because they “claim” to be fellow Christians who were unjustly attacked by terrible Muslims. The Armenians are not truth tellers and Americans should learn truth for themselves before giving this unholy people billions of their dollars."

on the other side,
THERE ARE MANY TURKiSH MASS GRAVES (link)
Till 2015, 185 mass graves of Turks...
History is not One-Sided...(link)
Turkish Genocide Museum - Iğdır (link)